Jay Calderin, Founder and Executive Director of Boston Fashion Week, discusses his work as a designer with the Fashion Accessibility Project and how it inspired new ways of thinking about designing for the body. 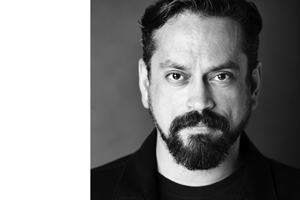 The Boston Globe refers to Jay Calderin as “a budding designer’s best friend.” Calderin is the author of The Fashion Design Reference & Specification Book (formerly Form, Fit, Fashion), which the LA Times called, “a new fashion bible for designers, aspirers and the just plain curious, this tome contains all the secrets.”

Calderin founded Boston Fashion Week and has served as the organization’s Executive Director since 1995. In 2012 he was appointed Creative Director of the first Chengdu Fashion Week in China. His work as a fashion designer has graced the pages of Vogue and Elle magazines. He held the office of Regional Director of the Fashion Group International of Boston (FGI Boston) from 2009-2010 and has served on the Design Industry Group of Massachusetts (DIGMA) Design Advisory Council since 2008. In 2015, Jay was invited to serve on the Leadership Council for Boston Creates – a citywide cultural planning process led by the Mayor of Boston’s Office of Arts and Culture.

He is an instructor and the Director of Creative Marketing at the School of Fashion Design in Boston. In addition to artist demonstrations and teaching studio art classes at the Museum of Fine Arts, Boston he facilitated a program called Fashion Tales at several branches of the Boston Public Library and joined the ranks of CreativeLive’s highly respected team of online educators. Jay was honored by Big Brothers Big Sisters of Massachusetts Bay as Big Brother of the Year in 2009, and by Youth Design as Mentor of the Year in 2014, and by the Boston Arts Academy for his work in fashion.

His pursuits as a professional coach and motivational speaker have afforded him opportunities to share and explore his ideas about the fashion industry at the Museum of Fine Arts, Boston, Peabody Essex Museum, Isabella Stewart Gardner Museum, Nantucket Atheneum, and leading educational institutions that include Harvard University, Massachusetts Institute of Technology, Wellesley College, Tufts University, Lesley University, and Babson College. His dedication to education was recognized in Martha Stewart’s Whole Living/Body + Soul magazine in a feature article by New York Times best-selling author Cheryl Richardson about “Finding Your Passion”.

From the Workroom to the Runway