Catherine Allgor, President of Massachusetts Historical Society, shares her path to becoming an historian, and how the Society is expanding efforts to “get out” – by digitizing collections, expanding community partnerships, and more. (Also, don’t miss this conversation we had with Allgor last year about Mass History Day, a state affiliate of National History Day, a highly-regarded program that gives students a chance to dig deep into the past through creative learning and presentations.) 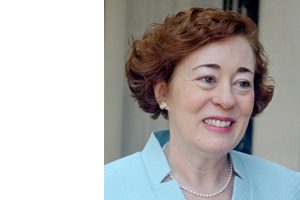 Catherine Allgor has been appointed the next president of the Massachusetts Historical Society.  Previously, she had been the Nadine and Robert Skotheim Director of Education at the Huntington Library in San Marino, CA, and a former Professor of History and UC Presidential Chair at the University of California, Riverside. Allgor attended Mount Holyoke College as a Frances Perkins Scholar and received her Ph.D. with distinction from Yale University, where she also won the Yale Teaching Award.  Her dissertation received a prize as the best dissertation in American History at Yale and The Lerner-Scott Prize for the Best Dissertation in U.S. Women’s History.

She began her teaching career at Simmons College and has been a fellow at the Radcliffe Institute for Advanced Study and a Visiting Professor of History at Harvard University. Her first book, Parlor Politics: In Which the Ladies of Washington Help Build a City and a Government (University Press of Virginia, 2000), won the James H. Broussard First Book Prize from the Society for Historians of the Early American Republic and the Northeast Popular Culture/American Culture Association Annual Book Award.  Her political biography, A Perfect Union: Dolley Madison and the Creation of the American Nation (Henry Holt, 2006), was a finalist for the George Washington Book Prize.  In 2012, she published Dolley Madison: The Problem of National Unity (Westview Press) and The Queen of America: Mary Cutts’s Life of Dolley Madison (University of Virginia Press).  President Obama has appointed Allgor to a presidential commission, The James Madison Memorial Fellowship Foundation.   Catherine Allgor also serves on the Board of Directors of the National Women’s History Museum.