Rosemary Tracy Woods, Executive Director of Art for the Soul Gallery in Springfield, MA, discusses how artists can plug into their local arts community and how a community’s efforts to engage local artists can be more inclusive, and ultimately more representative of all the people they serve. 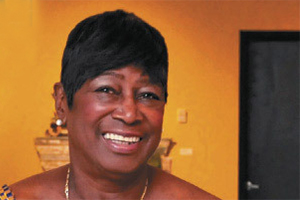 Rosemary Tracy Woods, Executive Director of Art for the Soul Gallery, strives to embody the intersection of art and social justice. Growing up the only girl in a Philadelphia family with eight brothers, one of whom was the late R&B singer, Harold Melvin of Harold Melvin and the Blue Notes, Woods was immersed in art from a young age.

She first came to the Springfield area in the early 1970s with her fiancé. When he did not return home from Vietnam, she immersed herself in study at Temple University in Philadelphia. From there, she transitioned into politics to work on the Massachusetts campaign of Edward William Brooke III, the first African American elected to the Senate by popular vote.

Woods’ first official job was as interim director for the governor’s committee on employment of persons with disabilities under former Connecticut Governor Weicker, where she worked to enforce the regulations of the Americans with Disabilities Act. Recognized for her outstanding achievement by the State of Connecticut as a coordinator of diversity programs, Woods has been an advocate for artists of all abilities from the start. Woods has worked extensively with both the Springfield and Massachusetts Cultural Councils, among many other regional advocacy groups that work to advance the arts and social justice. Through her work with Organizing for America, a project of the Democratic National Committee, Woods met first lady Michele Obama. In 2010, Woods was awarded an Unsung Heroine Award from the Massachusetts Commission on the Status of Women. She also received a special recognition from former Massachusetts Governor Deval Patrick for her work with the arts.

Her work has also earned a Massachusetts House of Representatives citation for “exemplary dedication and outstanding contributions to community service and diligent efforts to promote multicultural understandings and inclusivity through the arts. Woods was awarded the 2017, Stone Soul Festival Community Service Award, Springfield Cultural Council Award in 2018 for Excellence in the Arts, The Springfield Indie Soul, Legacy Award and the Pioneer Award for Arts and The Association of Black Business & Professionals, 2019 Creative Economy Award.