The American Repertory Theater’s Diane Paulus and Diane Borger share how they think about risk, and what it means to have “high tolerance for disequilibrium” that permeates the entire culture of an organization. By experimenting with doing things differently, they say artists and arts organizations actually develop muscle and an ability to stay afloat in “risky water.” 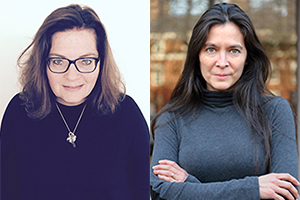 Diane Paulus is the Terrie and Bradley Bloom Artistic Director of the American Repertory Theater at Harvard University. A.R.T. directing credits include ExtraOrdinary, Jagged Little Pill (beginning on Broadway at the Broadhurst Theatre in November 2019), The White Card, In the Body of the World, Waitress (currently on Broadway at the Brooks Atkinson Theatre, on US national tour, and in London’s West End), Crossing, Finding Neverland, Witness Uganda, Pippin (Tony Award, Best Revival and Best Director; opening June 2019 in Tokyo, Japan), The Gershwins’ Porgy and Bess (Tony Award, Best Revival; NAACP Award, Best Direction), Prometheus Bound, Death and the Powers: The Robots’ Opera, Best of Both Worlds, and The Donkey Show.

In the A.R.T.’s 2019/20 Season, she will direct Gloria: A Life following its acclaimed Off-Broadway run, as well as 1776, which will subsequently play at Center Theatre Group (LA) and on Broadway at the Roundabout Theatre Company. Other recent work includes Gloria: A Life, Cirque du Soleil’s Amaluna, currently touring the US, Invisible Thread at 2econd Stage, and The Public Theater’s Tony Award-winning revival of HAIR on Broadway and London’s West End. As an opera director, her credits include The Magic Flute, the complete Monteverdi cycle, and the trio of Mozart-Da Ponte operas. Paulus is Professor of the Practice of Theater in Harvard University’s English Department and Theater, Dance & Media concentration. She was selected for Boston Magazine’s 2018 list of Boston’s 100 most influential people and the 2014 Time 100, Time magazine’s annual list of the 100 most influential people in the world.

Diane Borger is the Executive Producer of the American Repertory Theater at Harvard University. She joined the A.R.T. in the fall of 2009 as the Executive Producer for Sleep No More, and took on the full-time position of Producer for the A.R.T in January 2010. Borger spent over a decade as General Manager at the Royal Court Theatre in London, where she produced more than one hundred and fifty productions, including The Seagull, Rock ‘n’ Roll, and The Weir, which transferred to Broadway in New York. Previously Borger spent thirteen years as Deputy Head of the National Theatre Studio of Great Britain, where she oversaw the readings, workshops and classes for some of the most prominent playwrights, actors and directors in the United Kingdom. Borger has a Master of Arts in Theater from Ohio State University.