Matthew Mazzotta is an artist and activist. His work utilizes – and fuels – community dialogue. Through the creation of public artwork and space, he aims to leave people with an experience that expands their view of where they live. 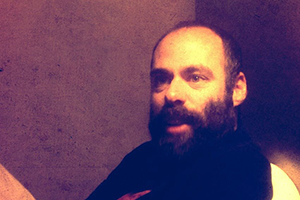 Matthew Mazzotta works at the intersection of art, activism, and urbanism, focusing on the power of the built environment to shape our relationships and experiences. He is as much as an inventor as he is an activist using artistic sensibilities to bring real world issues into the social discourse and lead collective public imagining. His community-specific public projects integrate new forms of civic participation and social engagement into the built environment and reveal how the spaces we travel through and spend our time living within have the potential to become distinct sites for intimate, radical, and meaningful exchanges.

Through his process, each project starts by creating temporary public spaces for listening – ‘Outdoor Living Room’ – as a way capture voices from local people that might not attend more formal meetings. Stemming from this approach are experiences that involve people from a range of backgrounds working together to create new models of living that contribute to local culture beyond the economic realm.

Matthew’s projects have been named “Architecture Project of the Year” from the Dezeen Awards at the Tate Modern to Huffington Post’s “9 Design Projects Tackling America’s Poverty Crisis, One Community At A Time” and have received dozens of international art and architecture awards such as Architizer’s A+ Award, Azure’s AZ Award, The WAN Award, CODA Award, SXSW Place By Design Award, The Chicago Athenaeum’s American Architecture Award, The Congress for the New Urbanism’s Charter Award, as well as, six of his projects have been recognized by the Americans For the Arts. His work has been featured on CNN, BBC, NPR, The Huffington Post, Discovery Channel, and Science Magazine to name a few, and presented at the Cooper Hewitt – Smithsonian Design Museum in NYC.

Mazzotta received a BFA from the School of the Art Institute of Chicago, a Masters of Science from the Massachusetts Institute of Technology’s Program in Art, Culture and Technology, a Loeb Fellow at Harvard University, and currently a Guggenheim Fellow.

Architecture Project of the Year – Dezeen Awards at the Tate Modern, London