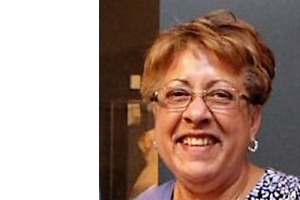 As president of the New Bedford Historical Society, Ms. Blake leads an organization that preserves and celebrates the legacy of African Americans, Cape Verdeans, and Native Americans in her home town of New Bedford, MA. The Society has worked to preserve and document the history of the freedom seekers who found their way to New Bedford, a hub on the Underground Railroad in the 19th century.

The Society has led the efforts to restore and preserve the Nathan and Mary Johnson House, the first home in freedom of Anna and Frederick Douglass, an Underground Railroad site and now a National Historic Landmark due to the efforts to the Society members. The Society promotes local research on the Underground Railroad and has added 5 sites to the Network to Freedom. Ms. Blake is a career educator, with a long history of public art and history projects, advocacy and professional development.  Ms. Blake received the Julie McCarthy Community Spirit Award for her work in Historic Preservation from Preservation Massachusetts. Recently, Lee was the recipient of the National Park Service’s Robert G. Stanton Award for Exemplary Support. The award is named in honor of Stanton, 15th director and first African American director of the National Park Service, for his steadfast support of the National Underground Railroad Network to Freedom Program. It recognizes individuals who demonstrate an ongoing commitment to engaging with and promoting the program.

One thought on “Episode 74: New Bedford Asks: What Would an Abolitionist Do Now?”