George Fifield, Director of Boston Cyberarts, says, “Anytime you have a technology which can create an expressive medium, artists are some of the first people there – after it’s invented – to really explore it, and to stretch it, and to see what it really can do.” He discusses the evolution of media arts and details some recent projects using augmented reality and artificial intelligence. 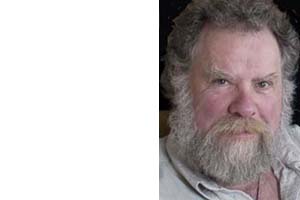 George Fifield is the founding director of Boston Cyberarts Inc., a nonprofit arts organization which programs numerous art and technology projects, including the Boston Cyberarts Gallery in Jamaica Plain and Art on the Marquee, on the 80 foot video marquee in front of the Boston Convention and Exhibition Center. In 2017, Boston Cyberarts curated The Augmented Landscape, large augmented reality sculptures at The Salem Maritime National Historic Site and other public artworks.

Fifield was executive co-producer for The Electronic Canvas, a documentary on the history of the media arts that aired on PBS in 2000. Fifield writes on a variety of media, technology and art topics for numerous publications.  In 2006, the International Association of Art Critics (AICA) Boston Chapter honored Fifield with the First Annual Special Award for Distinguished Contribution to the Arts Community. In 2007 the Boston Cyberarts Festival was the recipient of the Commonwealth Award in the category of Creative Economy.